We did it!!!! Major Arash was granted asylum at a last-minute Master Calendar Hearing today at the Batavia Immigration Court and released just a few hours later. I appeared telephonically for the hearing as it was scheduled just a few hours in advance, but I was glad to make it to Batavia in time to meet him in front of the facility at the time of his release. I am pleased to say that he is feeling good and is hopeful for his new life here in the United States. He will spend the next few weeks adjusting to life in the United States. My work is not done, however, as Captain Aminyar remains detained pending his appeal.

Tomorrow I will be launching an online fund for those who wish to donate to help Major Arash.

Read more at the Buffalo News 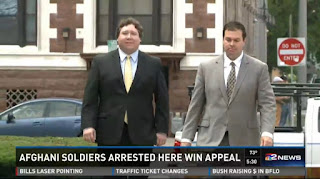