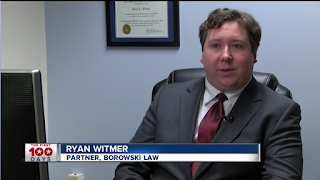 ABC 7 WBKW Buffalo interviewed Borowski Law attorney Ryan Witmer  about the issues families impacted by Trump's travel ban face. The story is about a Somalian refugee who spent the last two decades in Kenya, trying to get his visa to reunite with his brother and mother in Buffalo. Trump's travel ban is preventing this refugee from realizing his American dream.

Immigration lawyer, Ryan Witmer, a partner at Borowski Law says families looking for a new chance in America are running into an unexpected road block.

“Many of these people have disposed of all of their assets in the country they are coming from. They thought they were moving to a new life in the United States,” said Witmer.

Witmer's advice, anyone from the listed countries unsure of their immigration status in the United States, make sure they have legal representation.

You can watch the story and read the article here:
Trump's Travel Ban Keeping Families Apart

Please read this interesting article by Walter Ewing discussing Trump's dangerous and misguided executive order that eviscerates the enforcement priority system as we know it.

The executive order "effectively makes all unauthorized immigrants in the United States an 'enforcement priority,' regardless of whether they entered the country without inspection or overstayed a visa, and irrespective of whether or not they have a criminal record."

The ignorance of this decision is that enforcement resources are a finite resource, and if every immigration violation is considered a priority, how are we to determine which cases should receive the limited government resources to prosecute?

The article is available here:

I also recently was interviewed by Time Warner Cable News on this very issue of enforcement priorities. You can view the news story and the video here:

Of course, this was before Trump's ban on Muslims took effect. Over the weekend there has been nothing but turmoil in airports throughout the United States as lawful immigrants and non-immigrants, some of whom have lived in the United States for years with green cards and have families and businesses in this country, were turned back simply because their country of origin was on Trump's list of Muslim nations from which he chose to ban immigrants.

We will continue to monitor the situation with Trump's executive orders so as to effectively defend our clients from these unconstitutional, racist, and bigoted actions.

Please read a Buffalo News piece pertaining to my client, Noorullah Aminyar, who continues to fight for asylum in the United States and remains detained at the Buffalo Federal Detention Facility. Noorullah very recently suffered the devastating murder of his brother at the bloodthirsty hands of Afghanistan's brutal Taliban, even as he continues to live in immigration detention while awaiting the decision of the Second Circuit Court of Appeals in his case.

You can read the story here:
Afghan seeking asylum in Buffalo says Taliban killed his brother

Our office has moved to the 10th floor of the iconic Ellicott Square Building in Downtown Buffalo. We are now in Suite 1060. This bright new space is over twice the size of our previous office location on the eighth floor and will allow us to better serve our clients as we continue to grow.

We also welcome the newest member of our team, Thomas Rosamilia, an associate immigration lawyer at Borowski Immigration Law. Thomas brings with him a wealth of knowledge pertaining to business immigration, as well as extensive experience in appellate litigation.