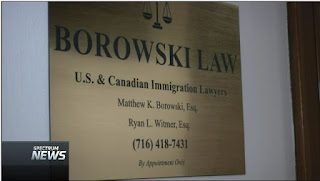 With President Donald Trump considering extending the power to enforce immigration law to local law enforcement agencies, Ryan Witmer, an immigration lawyer with Borowski Immigration Law, says he doesn't see a practical reason for the proposal.
"It's the federal government's responsibility to manage and enforce our immigration laws, not the state and local governments," said Witmer.

Eight asylum-seekers, including four children, barely made it across the Canadian border on Friday as a U.S. border patrol officer tried to stop them and a Reuters photographer captured the scene. 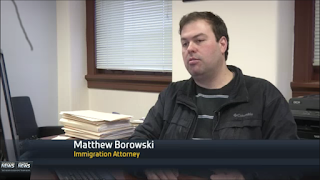 "Certainly, Trump could try to put forward a more narrowly-tailored travel ban, but I think, at the end of the day, if he tries to focus it on Muslim-majority nations, the statements he made during the campaign are going to come back to bite him," said Borowski.

Borowski says that's because courts take intent into account when making their decisions.

See the full story here:
Immigration Attorneys and Clients Wait for Whatever's Next
Posted by Matthew Borowski, Esq. at 7:46 AM 4 comments:

Matthew Borowski, Buffalo immigration lawyer, was quoted by the Montreal Gazette in an article about a Muslim Canadian woman who was denied entry to the United States after being detained for four hours and questioned about her political and religious views. Attorney Borowski discussed the border search exception to the Fourth Amendment of the Untied States Constitution, which gives border agents wide latitude to search people and goods moving across the international border.

Matthew Borowski, a Buffalo, N.Y.-based immigration lawyer, said border-crossing agents benefit from the border search exception, which allows extensive questioning, searches and seizures without a warrant or probable cause.

In more recent years, he said, it’s extended to include the search of electronic devices, including cellphones and laptops.

“It’s been quite a contentious issue, and unfortunately the law hasn’t really settled on the topic yet,” Borowski said of device searches at border crossings.