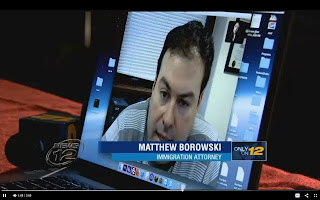 Read an article by Mallory Moench at the Albany Times Union about Omar Helalat, a Deferred Action for Childhood Arrivals (DACA) recipient and member of the Tau Sigma National Honor Society at the University at Albany, who is represented by Borowski Law. Omar Helalat was detained by immigration authorities, had his DACA revoked, and has been ordered removed

From the article:
"When he cheated on his girlfriend of a year, she accused him of trying to strangle her. In March, he was arrested on domestic violence charges and sent to the Albany County jail. His father came from Rockland County, just north of New York City, and paid to bail his only son out of jail, but Helalat was already in immigration detention. The government revoked his DACA and started his deportation.

The charges against Helalat were dismissed when his ex-girlfriend wrote a letter in his defense to the court. The case was unable to proceed without victim cooperation, a spokesperson for the Albany County District Attorney's office said."

The story was also covered by News 12, who interviewed Matthew Borowski. View the story here.